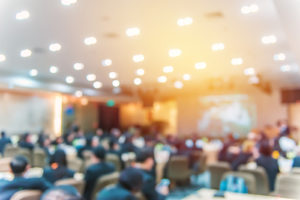 At Zilker Media we are all avid conference goers – whether we are speaking or just observing. When attending, you’re not only there to learn but to network. Conferences can be overwhelming at times because there are so many people you want to connect with but you have only three days of sessions and events to attend. Social media now makes easier to maximize your efforts from connecting with speakers, getting notes from a session you might have missed or finding a client who is in need of your services. If you are overwhelmed with trying to manage all of your social media channels while attending a conference – our strong suggestion is to focus your efforts on effective Twitter strategies. Twitter is the most valuable channel when it comes to relationship building and giving updates from events. It evens allows you to focus your conversation to others attending the event with the use of one hashtag.

We like to view Twitter as a cocktail party – when you walk into a cocktail party or log into Twitter there are so many conversations going on surrounding various subjects. Some of these conversations involve millions of people and some involve a handful of experts talking about a niche subject. The goal of Twitter is to find those talking about the subjects important to your brand and hone in on being part of that conversation. So when attending a conference, you want to step into that conversation and focus on connecting with others there. Twitter allows us to easily do this with the @ mention and hashtag features. Here are some effective Twitter strategies to help you stand out at your next conference.

Use the event hashtag in your Tweets

One of the most important things to do before or when you walk into a conference is to locate the event hashtag. For example, the Social Media Week in Austin conference we attended recently had the hashtag #SMWATX. A hashtag allows you to view all the people tweeting about this specific event in one feed. Using the hashtag on all of your tweets at events will ensure others attending see it. I have included an example below how I have incorporated an event hashtag in my Tweets while at a conference. 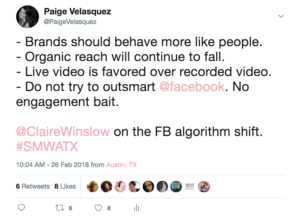 The hashtag can be used at the beginning, middle or end of a Tweet – as long as it is included in the text, your message will show up on the hashtag feed. Once you post your first Tweet with the hashtag, you can click on it to see others posting on the feed. The great thing about being able to see the entire hashtag feed is you are able to engage with others by replying, retweeting, liking or direct messaging another attendee. We highly recommend doing this to engage with speakers and attendees. I recommend taking time in between sessions or at the end of each day to go through the feed and spend time engaging in conversation with others. This feed is a great way to focus your efforts on those who want to engage in the same conversation. There is an example below of what your event feed might look like. 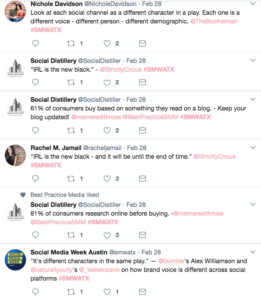 Use the @ mention in your Tweets

The most powerful tool on Twitter is the @ mention – the username for each profile that follows the @ symbol. For example, if you wanted to mention Zilker Media in a Tweet you would type @zilkermedia. Using the @ mention feature in a Tweet gives that profile a notification that you mentioned them in your Tweet. Being included in their notifications sections increases the likelihood they will engage in return. This is a great tactic when trying to start conversations with speakers or influencers at a conference. At the Digital Summit conference in Dallas, I was able to personally engage with Patron’s CMO Lee Applbaum after his keynote. Although he has over 23,000 followers, he saw my Tweets because I @ mentioned him in every Tweet – he had a few notifications from my profile – and the event hashtag. I was also timely with my Tweets giving live commentary during his keynote. 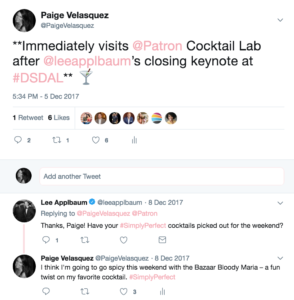 You have the opportunity to build many relationships by simply including @ mentions in your Tweets when attending events. Finding all the speakers’ Twitter usernames can also be done before you ever walk in the conference. Once you decide on the sessions you want to attend, you can easily search each name on Twitter and make a list in the notes section of your phone so you are not having to do that during the session. You can also search the event or the company hosting the event on Twitter to see if their profile gives the event hashtag and @ mentions the speakers’ while promoting the conference.

Our favorite conference best practice is to follow up on our experience with a blog post. I encourage you to keep the conversation going by sharing your favorite takeaways. You can even featuring your Tweets and others’ found in the conference hashtag feed as visual elements in the post. Promoting this blog post also gives you another reason to @ mention the speakers or attendees you included in your follow up. Our Digital Marketing Strategist Nichole Davidson recently did this with her follow up post after Social Media Week in Austin. 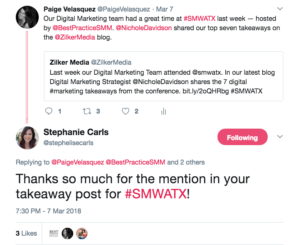 Twitter can be overwhelming at times but it is the best channel to build relationships when attending conferences. Success on Twitter comes from engaging in conversation rather than self-promotion. When approaching a Tweet, think back to the cocktail party analogy. How would you approach a group of people at a cocktail party?