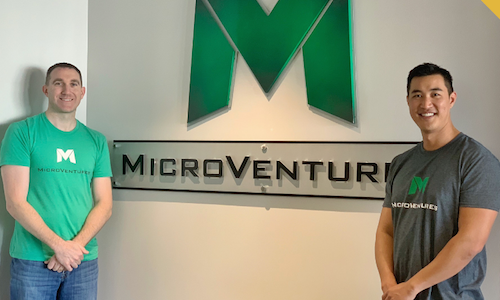 Wes interviews Bill Clark, CEO and Founder at MicroVentures, on The EnTRUEpreneurship Podcast. Founded in 2009, MicroVentures is a full-service online platform that enables the public to take part in venture capital investments. With as little as $100, users can invest in a wide range of startup opportunities. To date, Clark’s company has raised over $200M on the platform from 110,000 investors, for over 250 different companies. MicroVentures has also been featured in prominent publications such as The New York Times, The Wall Street Journal, and Forbes.

Clark’s own story is a lot like investing — a tale of luck and risk. On the podcast, Clark shares how he believes his company’s success is largely because he entered the market at the ideal time, in the ideal economy. Yet, on the opposite side of that coin, Bill is brutally honest about the fears involved with starting a business, including his hesitancy to involve any friends and family because of the risks involved. But, as it goes sometimes when investing, Bill’s willingness to take a risk paid off, and he’s here to share any smarts he’s picked up along the way.

“I always wanted to be the CEO of a company ever since I was little. What I found is that you don’t always have to be the CEO in order to be successful and help the company. You want to find people who are passionate.”

[On telling investors that a company had folded] “What I found was that investors understood the risk, and I was being a lot harder on myself than I should have been.”

“My dad always said, ‘Go into the corporate world first and learn, and then you can eventually take these learnings and do something yourself.’”

[On MicroVentures’s early investors] “Not only did they have to trust us as a platform, but then they had to like the company and trust the company too. In the early days, trust — and not having a brand — was very difficult for us.”

“You can’t do everything yourself. You have to have a very strong team around you to help you. Don’t get too deep into the weeds, otherwise you’re not going to have the time you need to get the business to the next step.”

“All we did was we took what was already legal that people had been doing for many years and just put it on the Internet. We digitized it, basically.”

“You have to be able to handle all of the emotions that come with being the CEO or being part of an early stage company.”

3:14: Bill details his early life and shares how working in corporate America taught him many lessons about starting and running a business.

9:00: Bill discusses how the idea of MicroVentures came to be and how this idea became a business, while he still had a full-time day job.

12:01: Bill briefly explains the business of MicroVentures — crowdfunding for equity.

13:23: Clark explains his transition from his corporate job to the driver’s seat of his own startup and how his investment firm secured its first company.

15:38: Bill shares how the earliest days of MicroVentures were very difficult, due to the company’s unique business model.

17:15: Bill discusses how MicroVentures has been funded over the years, which historically includes using its own platform to help provide funding for the company.

22:11: Bill explains why he is now comfortable when new competition enters the crowdfunding market and describes why good timing led to the success of his company in its earliest days.

26:25: Clark shares what he has learned about the nature of being a CEO at a successful company.

28:28: Clark describes when he knew the company really “had legs” and was bound for rapid growth.

30:35: Bill retells his hardest moments as a CEO and shares how he personally processes the emotions of being CEO of a quick-moving startup.

33:38: Bill discusses his company’s incredible accomplishments thus far and shares a piece of advice that has allowed him to scale his company successfully.