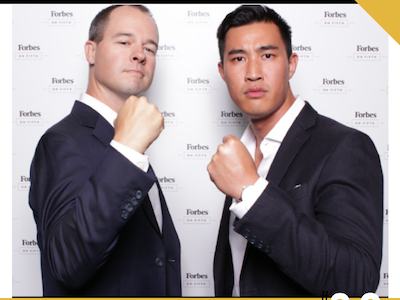 We have a special episode of The EnTRUEpreneurship Podcast today, our CSO Wes chats with the Founder of Zilker Media Rusty Shelton. Rusty is an expert on all things marketing and entrepreneurship, having co-authored two books and spoken at top conferences including EO Alchemy, SXSW Interactive, and more. Rusty is also a serial entrepreneur, having built and sold two businesses before the age of 35. His first business — Shelton Interactive — handled the launches of more than 30 New York Times and Wall Street Journal bestsellers and was named one of the nation’s top 10 social marketing agencies in 2014 and 2015 by the research agency Clutch.

On the podcast, Shelton discusses a broad array of topics, including the fear associated with entrepreneurship and the regret of letting that initial stress derail progress. He also speaks on the difficulty of acquisition — both in deciding whether to move forward with selling a company and with finally letting go of that company once the decision has been made. Rusty also discusses his most recent foray into entrepreneurship and the joy of using lessons learned from old companies to make new business endeavors more successful.

[On the stress of early entrepreneurship] “I think I missed opportunities for the business because I was really focused on the short-term versus building more of a vision for a business that could continue to scale up.”

“One of the great opportunities when you get a second ‘at bat’ is you can take all of the lessons you learned the first time around and put them into practice.”

“If you’re considering selling your business or if you’re getting ready to sell your business, spend some real time understanding and being honest with yourself about the challenge that’s about to be in place emotionally.”

[On starting out as an entrepreneur] “I was scared to death… If you can imagine the analogy of building a plane in the air and actually getting that thing to fly before it hits the ground, we weren’t starting with a bunch of altitude.”

“Culture eats strategy for lunch… To me, that statement is the foundation of absolutely everything that I try to do on the entrepreneurial front.”

“What happens when you sell a business is you kind of hand over everything — your team, your clients, your vision — to somebody else. The positive is that I was handing it over to someone that I had a lot of confidence in.”

2:40: Rusty describes his early home life and how he chose his college major and eventual career.

4:04: Rusty explains how he landed his first full-time gig — including his unique motivation to find this job out of college — and details his first longings to start his own business.

12:15: Shelton describes the events that ultimately led him away from his first role, which involved a failed attempt at personally acquiring the company and a life-changing talk at SXSW 2010.

15:00: Rusty relives the fear of his agency’s earliest days and how he nearly lost his early agency’s biggest and most noteworthy client.

19:10: Rusty tells why his time at his original agency — Shelton Interactive — was “one of the biggest blessings of [his] life” and how his agency differentiated itself from competition.

21:00: Rusty outlines the events and “many sleepless nights” that led to his company’s acquisition and describes the most difficult moment of his entrepreneurial journey to that point.

24:56: Shelton describes the success of Shelton Interactive post-acquisition and touches on the excitement building around his new agency — Zilker Media.

26:44: Rusty shares some lessons learned from his acquisition, including some important takeaways around preparing for the emotional toll of selling something you’ve invested your life into.

28:34: Rusty deep dives on the differentiators between Zilker Media and Shelton Interactive and gives a glimpse of what the future holds for both himself and his new agency.

32:14: Rusty reflects on what he’d have done differently if he could do it over again — mainly, cutting down on short-term stress for long-term good.