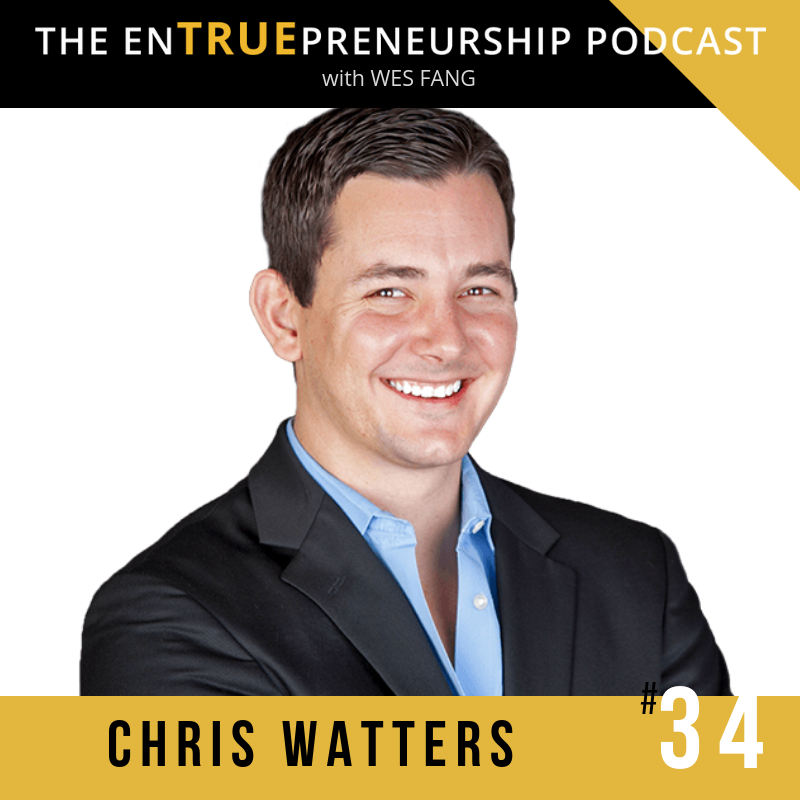 On our Chief Strategy Officer Wes Fang’s The EnTRUEpreneurship Podcast, Wes speaks with real estate mogul Chris Watters, CEO and Founder of Watters International Realty. Watters International, which began as an Austin-centric operation, has now expanded into a franchise model and is operating in markets across the United States and Canada. Chris is also at the helm of two other related ventures — a real estate technology company (#RealDeal) and a real estate investment entity that buys and sells properties (WHD Investments).

In the podcast, Chris lays out the timeline that brought him into the real estate game, packed with rich stories of early entrepreneurship, what drove him into the franchise model, and what the future holds for his endeavors. Watters shares lessons learned as a young entrepreneur, including one vital lesson that came alongside a hefty helping of humble pie — never think you have it all figured out. Because, as Watters knows, success comes to the coachable.

“For anyone that’s a true entrepreneur at heart, it’s very hard to give them any advice and get them to listen, unless they’re in a very coachable and humble place in their life.”

“Shoot, I tell anybody, getting a [professional] coach — and specifically a coach that’s been where you are, has found results, and has the systems that you want to model — pay that guy as much as it’s going to take to mentor you.”

“Almost out of necessity, my entrepreneurial DNA got pulled out pretty early, just simply because I seem to always be coming from a place of lacking something.”

“I always kind of knew I was going to work for myself… I hated people telling me what I could or couldn’t do. I was always coming from a place of limitation and lack and didn’t want any ceiling from an income perspective.”

“I started trying to connect with as many people as I could that found success and then started modeling the things they were doing in their businesses.”

“I think the secret sauce is failing fast.”

2:00: Watters walks through some of his earliest jobs and businesses, the motivation behind taking on these gigs, and how he figured out that he had a knack for sales.

7:28: Chris tells the stories of how two of his earliest jobs nearly landed him — or others — in jail.

17:14: Chris describes how and why moved into real estate and tells his “humble pie” story of how he hit rock bottom.

26:51: Watters explains how he started picking up all of the pieces post-rock bottom and describes how this situation taught him one of his most valuable lessons.

28:30: Watters describes the he sold an “unsellable” house and how this led to him establishing Watters International.

33:04: Chris tells the one most important takeaway he learned from working with his first ever sales coach.

35:58: Chris describes the biggest lesson that he learned when he found himself on the other side of the table — the one doing the coaching and training.

38:01: Watters International sold over $100M in property in 2015. Looking back, Chris reveals what he believes is the “secret sauce” behind his company’s success.

39:13: Chris describes how his Austin-based realty firm became a franchise.

44:26: Watters shares what the future holds for his company and gives a piece of advice that he wishes he’d known when it all started — be coachable.